Below are samples of the current scripts I offer. I can also match styles on your invitations or stationary for a cohesive look.
Scripts and ink colors are completely customizable.
All scripts are written completely by hand with dip pens, these are not printed scripts.

The scripts in Group A are my most budget friendly options. They are also the scripts with the fastest turn around time. If you are in a rush, please consider one of theses styles. Please click below for list of current prices.
Price List 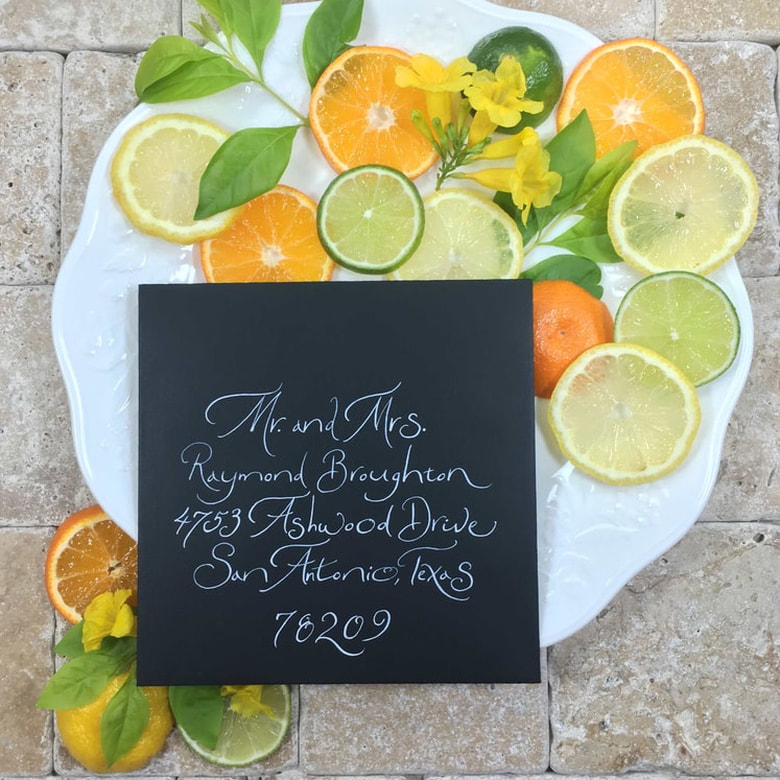 CORAZÓN
Fresh, fun, and bold but retaining an air of delicate elegance, this script is perfect for the modern couple. This is my interpretation of the Akim cursive invented by noted German calligrapher Hans-Joachim Burgert. He believed that writing should be “full of motion and emotion” and developed his script to mimic the rhythm of a beating heart.  I’ve named this style Corazón as a nod to the romantic origins of this script. ​ 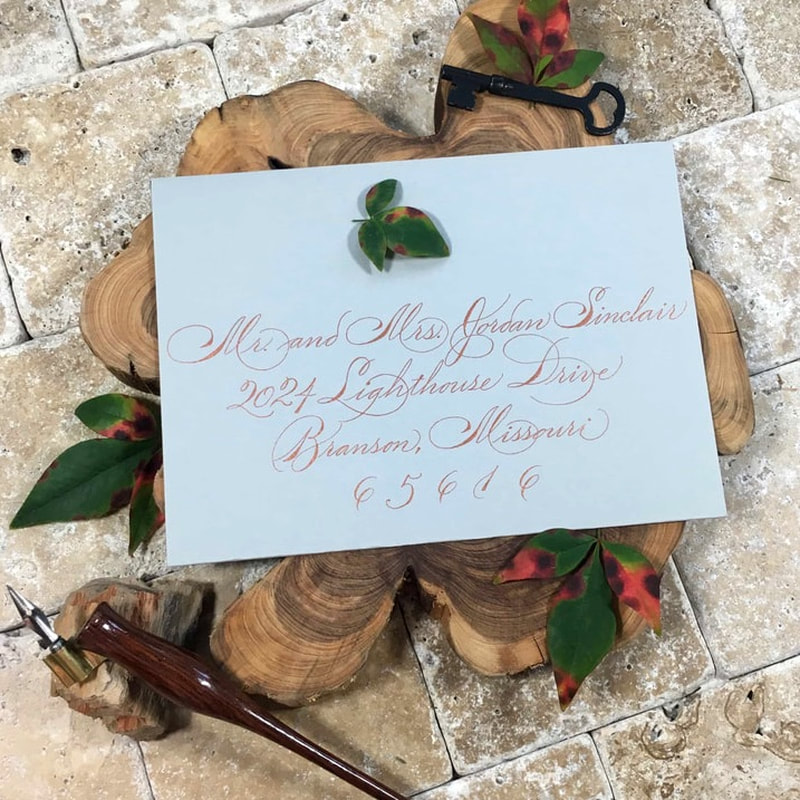 Calais
Restrained without being formulaic, this script is classic with just a hint of wild openness. In Greek mythology Caiais was the winged son of the North wind. I’ve tried to capture some of that open, airy freedom in the swooping lines of this script. 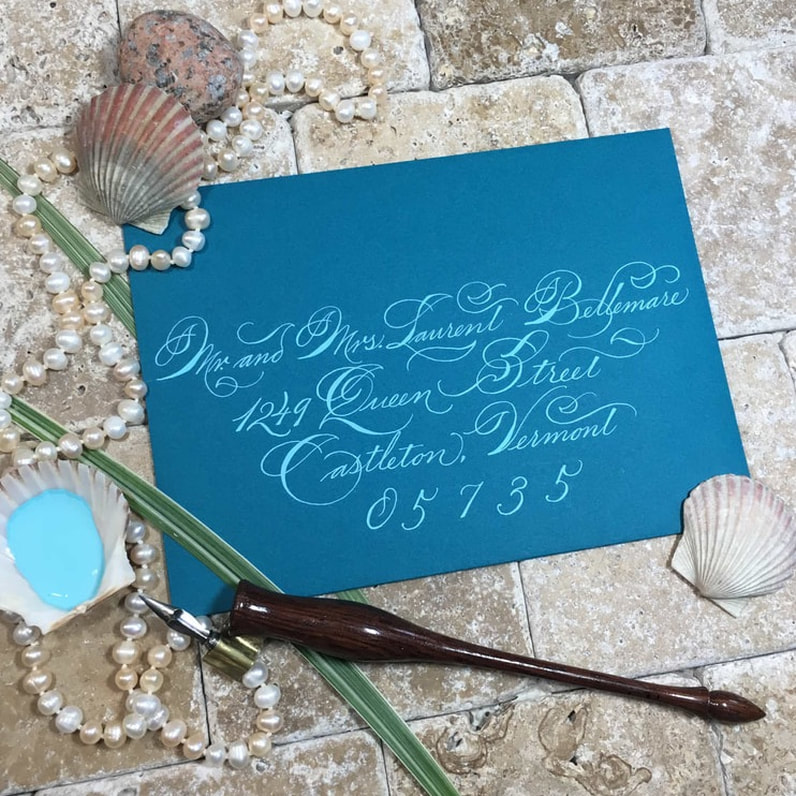 Calypso
Designed to mimic the swells and cresting of waves, and named for the famous sea Nymph from the Odyssey, this is a uniquely wild and fluid script - the perfect match for the couple that wants something distinctive and original for their special day. 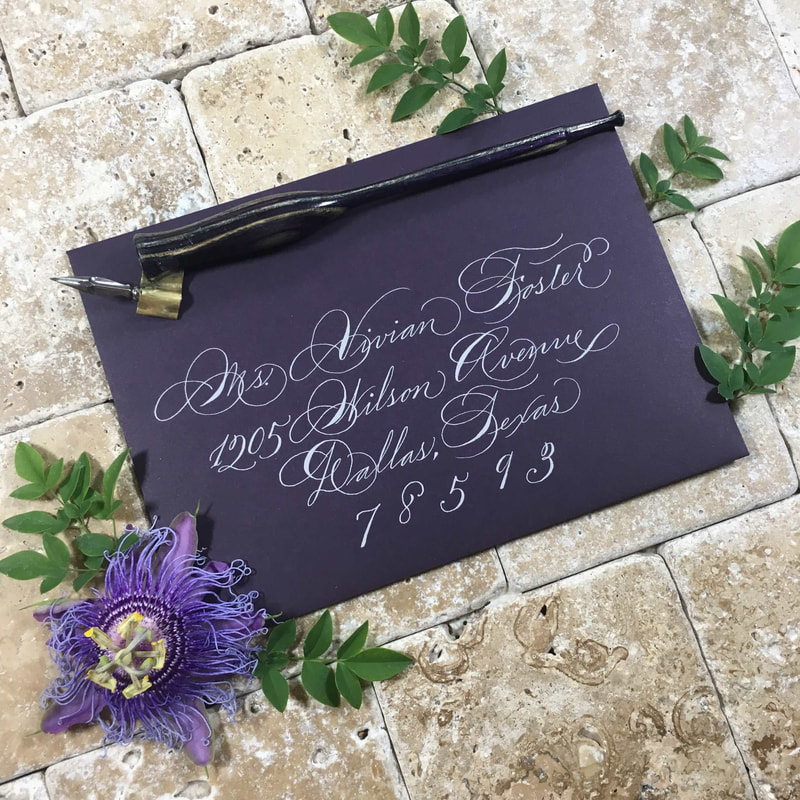 Avalon
Avalon is the mythical island in Arthurian legend where Excalibur was forged and the possible resting place of King Arthur himself. This script is graceful and a bit mysterious, with flourishes that swirl around the text like rolling mist. 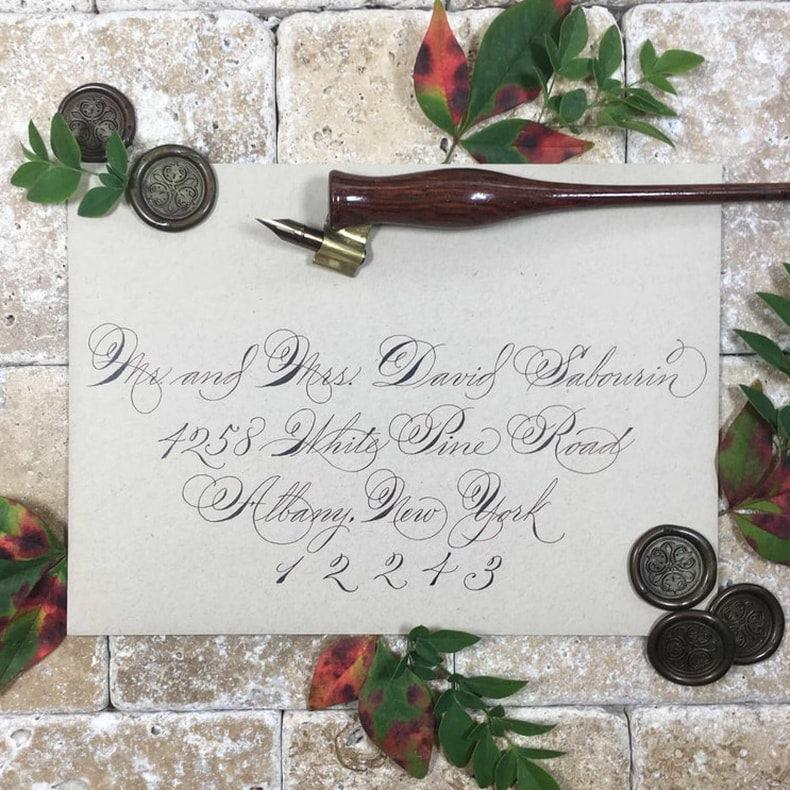 ORLÉANS
With its delicate filigree like scrolls and contrasting heavy shades, this script is a study in contrast and harmony. Thoroughly unique and utterly charming, this distinctive script will set a beautifully original tone for your special day.

The scripts in Group B are part of my luxury line. They are more labor intensive and take longer to write. While these scripts can be rushed, they can not be done quite as quickly as the scripts in Group A. Please keep this in mind when choosing a script for your event. Please click below for list of current prices.
Price List 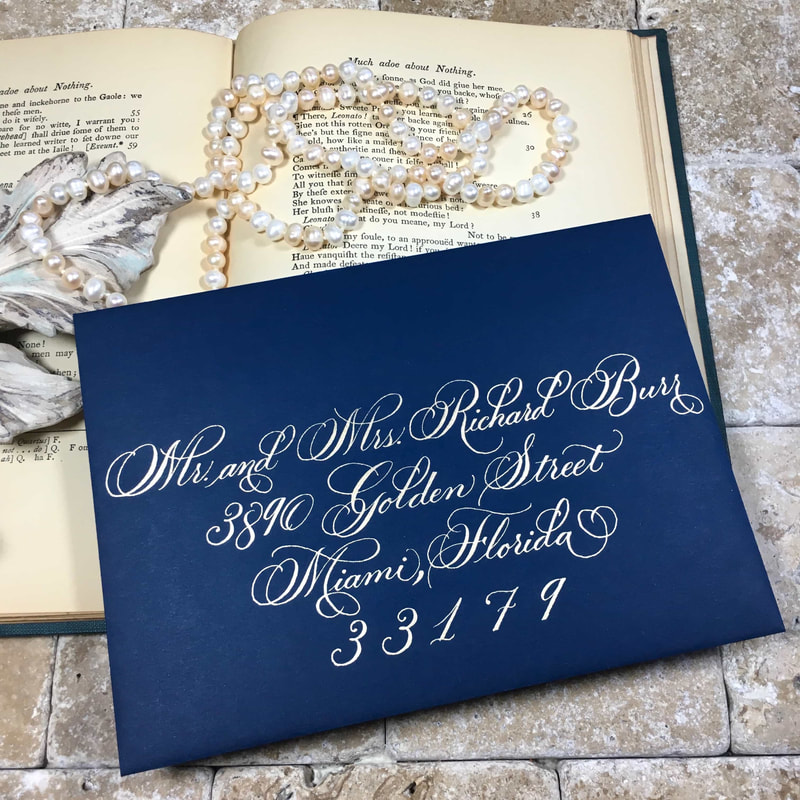 Stratford
Stratford is the classiest of classics and my most popular script. Named after the birthplace of William Shakespeare, you can’t go wrong its timeless sophistication. With its clean lines and just the right amount of flourishes, this style blends well with nearly any occasion. 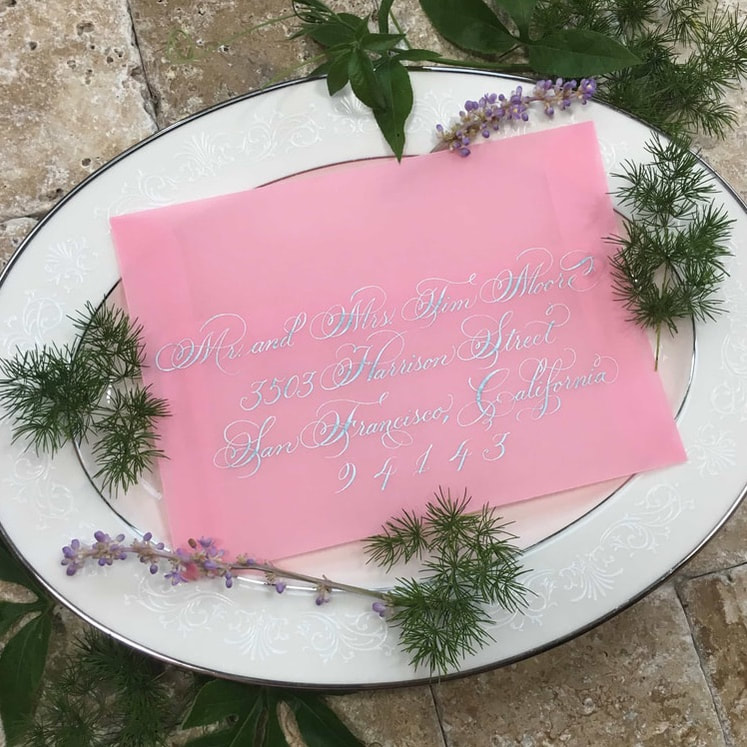 Arabesque
Inspired by the curling, coiling, and twisting growth of vines, this script simply dances across the page. It is the perfect combination of playful movement and classical structure, and brings a lively presence to any project. 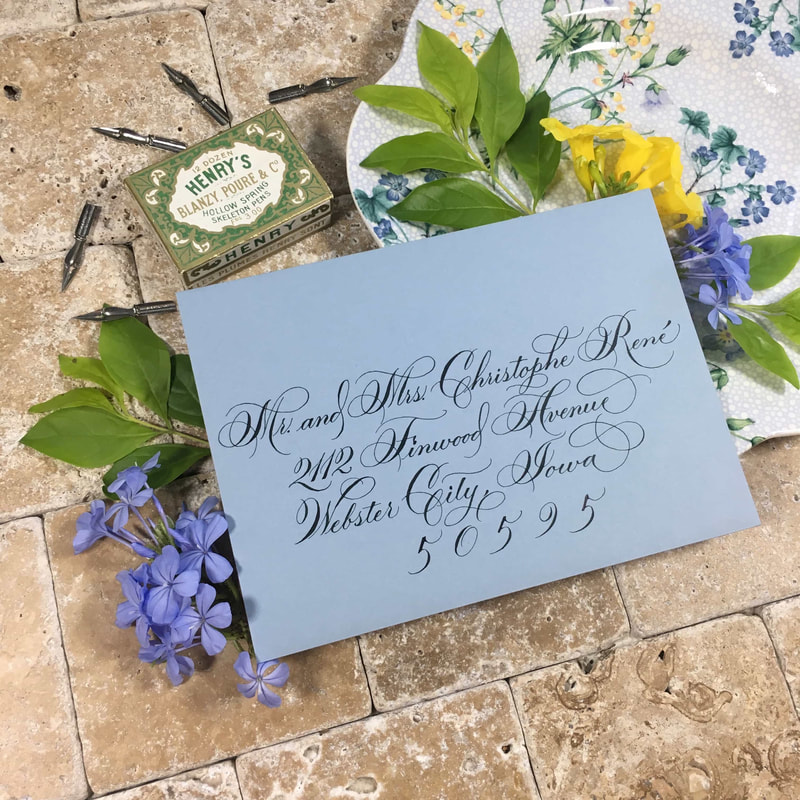 Calliope
Stately, but with an air of windswept grace, Calliope is a script for those who like the tradition and dignity of copperplate, but still want a lovely bit of wild unpredictability – like a summer breeze blowing through a country garden. 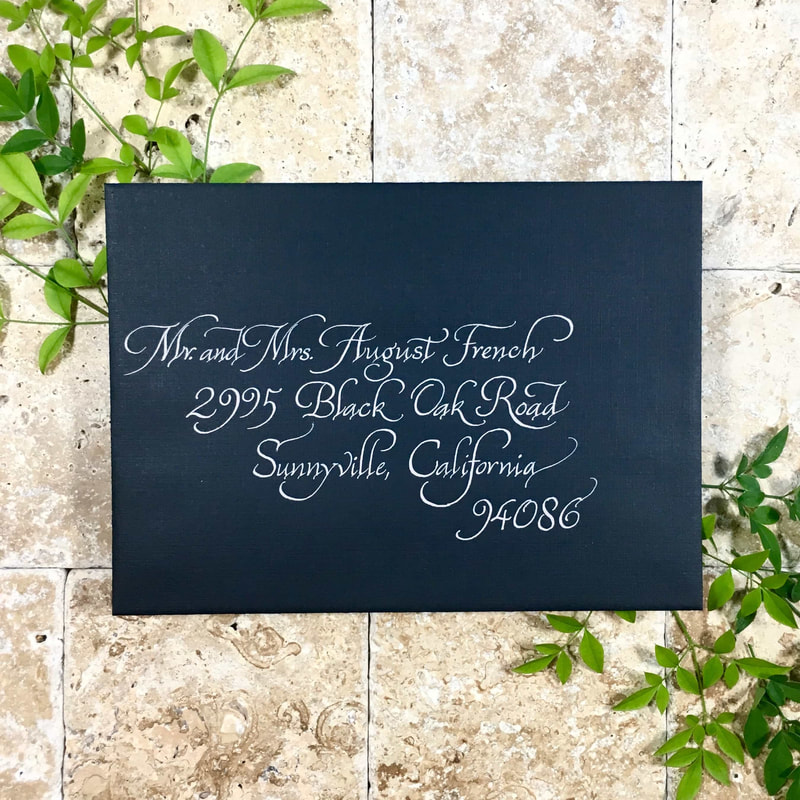 Vienna
Understated with a casual formality, Vienna is a wonderfully universal script. It can wear a black tie with ease, but also blends well with less formal occasions. You can not go wrong with these classic, clean lines and delicate hints of flourishing.
​
***Please note that due to the complexity of this script I do not center it. I offer it as left justified or left staggered only.
Example photo is left staggered positioning. 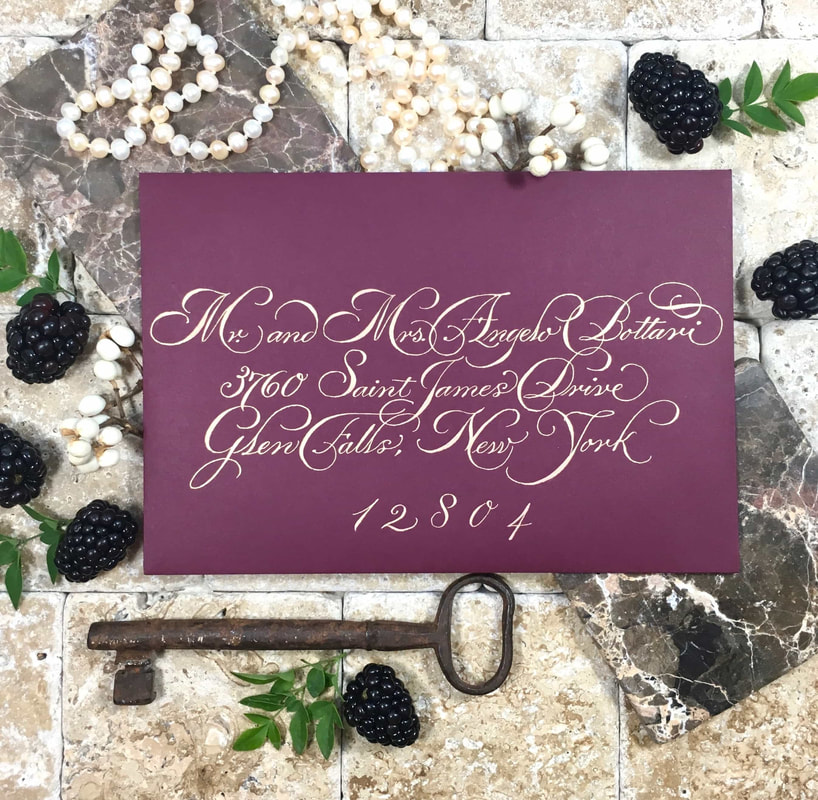 Bordeaux
Bold and timeless like the wine it is named for, this script is based on letterforms used throughout Europe for the last 500 years. Updated slightly for modern eyes, but still retaining their Old World romance, these letters have aged like fine wine and will never go out of style.

Monteverde
Named for the Monteverde Cloud forest in Costa Rica, this script features a rolling silhouette and delightful irregularity in its shapes and shades – just like clouds. Its soft romance makes it a perfect fit in both vintage and rustic settings.